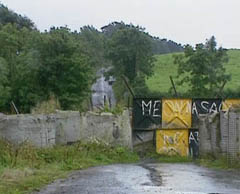 The partition of Ireland can be considered as a process that stretched from the first considerations of partition in 1912 to the Triparite Boundary Agreement finalising the location of the border in 1925. It involved the separation of all aspects of government that had previously operated on an all-island basis. However, even before the final location of the border was decided, the border became more established, concrete and effective following the creation of a customs barrier between the Irish Free State and Northern Ireland in 1923. A whole new set of arrangements for the regulation of the movement of people and goods across the border were put in place in order to enforce new duties on the movement of goods between the two jurisdictions. With this new function the border became a practical reality of borderland life and impacted on the movement of people and goods locally and much more widely. A series of officially designated border crossing places were established and those moving goods across the border were required to use them so that their goods could be checked. Complying with this regulation meant much longer journeys for many people who did not live near the approved crossing points. It also meant the hardship of the increased costs of everyday household goods. See borderland lives.

At first the creation of the custom barrier in 1923 did not significantly affect the movement of agricultural produce. Duties were payable on items such as tobacco, clothing and other manufactured goods. This had significant implications for retailers who formerly served areas that were now on either side of the border and for ordinary people whose patterns of shopping were disrupted by the new customs barrier. Evading duties was at the heart of the practice of cross-border smuggling. However, smuggling became more widespread as the sort of goods subject to duties expanded radically in the 1930s in what is know as the Economic War  (1933-39) between the Irish Free State and Britain. In 1932 as part of the process of establishing full independence the Irish government stopped making land annuities or payments due to the British government. In response the British government imposed new duties on imports from the Irish Free State that included farm animals and poultry, bacon, pork, butter, eggs and cream.

These new restrictions had an enormous impact on borderland life especially because of the importance of agriculture in the border counties. Farmers faced duties in bringing cattle and other farm animals to local fairs now across the border or long journeys to alternative markets. Some faced great difficulties in moving their own livestock if their farms straddled the border. Local people faced increased costs of basic foodstuffs because of the new duties. The Irish government in turn imposed duties on the cross border import of steel, machinery and coal. The Economic War intensified the local and regional effects of the border as it became a much more significant customs barrier with the new duties on food and farm produce. Tariffs on some goods were reduced as tensions eased in 1939 but the border continued to function as a customs barrier.

The outbreak of the Second World War also had particular implications for the nature of the border and borderland life. The Second World War meant that the border not only separated two political units but marked a boundary between the wartime conditions of Northern Ireland and the neutrality of the Irish state (officially known as Ireland, or Éire in Irish, after 1937). The war effort in Northern Ireland meant the intensification of agricultural and industrial production and coping with rationing. New tight wartime restrictions were imposed on exports from Northern Ireland. In Ireland the ‘Emergency’ meant shortages of goods previously imported from Northern Ireland. In turn the smuggling of food into Northern Ireland increased. In some areas the border was strengthened with the installation of new security measures, yet the flow of traffic across it also increased in this period as new demands for labour in Northern Ireland meant opportunities for work for people in Ireland, and as British and later American troops and some ordinary people escaped wartime shortages and restrictions by travelling across the border.

In the late 1950s the border become the focus of a campaign by the Irish Republican Amy to target British centres of administration and army depots along the border in order to enlist support for the republican cause - the ending of partition and a united Ireland. This Border Campaign which began in 1956 and was most active in its first few years ended due to lack of public support in 1962.

Some border roads were closed in response to the border campaign in the 1950s but the border became much more heavily militarized following the outbreak of violence and the beginning of the Troubles in the late 1960s. Most violence that took place outside Belfast during the Troubles was concentrated along the border as the heavy army presence responded to and became the target of republican attacks. In some areas the border became dominated by the army watch towers, heavily fortified RUC and army buildings, and police and army check points. All along the border minor roads were made impassable by the security forces with concrete blocks, craters, and metal spikes. Approved routes where subject to permanent army and police check points.

At the same time the nature and function of the border over the period of the Troubles was effected by wider economic and political developments some of which undermine and some of which reinforce or reshape the border as a political and economic boundary. From 1973 both Ireland and the United Kingdom shared membership of what is now called the European Union with its emphasis on cross-border mobility and European integration. Yet the border was reinforced by changing monetary arrangements. Before 1979 the Irish pound was linked to sterling so that the formal difference of currency did not mean that the border functioned as a border between currency areas.

The Irish government’s break with sterling in 1979 meant that the border now became a boundary between two areas with different currencies. This difference remains since Ireland, but not Britain, entered the European Monetary Union and adopted the Euro in 1999. Conversely political agreements from the mid 1960s led to the reduction of tariffs on trade in some goods between Ireland and the United Kingdom and the creation of the single European Market in 1993 abolished the border’s longstanding function as a custom barrier. European Union funding encourages cross-border economic co-operation and cross-border community projects and organisations have been funded since 1994 through European Union funding for the development of Peace and Reconciliation in Northern Ireland and the border counties of Ireland.

The border has been transformed too through peace process and the Good Friday Agreement of 1998. One strand of the Agreement concerned the North-South relationship and legislated for the creation of a North-South Ministerial Council co-ordinating formal co-operation between governments in Dublin and Belfast either through existing agencies or through the creation of new joint bodies. The areas to be addressed through cross-border co-operation are language, inland waterways, transport planning, tourism, European Union programmes, animal and plant health, cross-border workers, inland fisheries, aquaculture, urban and rural planning and teacher qualifications. Though progress in cross-border co-operation has been slow, North-South collaboration is now an established and relatively uncontroversial aspect of the political relationship between Ireland and Northern Ireland. Critics argue that more could be done to incorporate and support the activism and interests of people on the ground in cross-border initiatives and the development in the border counties.

The nature of the border as the formal divide between Ireland and Northern Ireland has be effected by these economic and political developments. Yet running alongside these shifts is a history of the ways a wide range of cultural, voluntary, religious, sporting, charitable and community groups have continued to operate cross the border or have forged cross-border connections. In a more everyday sense, people in the borderlands have lived with the changing nature of the border and the effects of the creation of a new political barrier across the networks of friendship, family, commerce and farming that spanned and continue to cross the county boundaries that became a political border in the early 1920s.