In the '50s and '60s, eh, when you crossed the border, you had a . . . customs pass, I suppose that’s what we called it. Em, my husband, because he, because he was a clergyman, and a doctor and a vet and a nurse, they could, they could cross, whether they were . . . stamped in or out.

But if I took the car, eh, I always had to make sure that our customs pass was the right way for me because they wouldn’t accept me, when I’d go to the border I couldn’t cross if, if I was already supposed to be in the, in the North, you know? . . . The frontier post closed at nine o’clock, and if you were going to a meeting, say, in Cavan, you had to decide, now would I be home at eleven o’clock, or would I be safer to say half-eleven, because you had to make an appointment . . . that there would be an officer there to stamp you through. Otherwise you just sat there till . . . the first person came along that had an appointment, you see, they’d let you through then, but they . . . wouldn’t come back to the post unless they had an appointment with somebody.

And that was an awful nuisance, because if you were held up, well, if they were waiting for somebody else they might wait, but if you had let yours run out, eh, you could be sitting at the border for a good while." Kathleen Richie, Blacklion, Co. Cavan

Well, on those unapproved roads, you could not use a motor vehicle, and the only people who . . . were immune from prosecution would have been, eh, clergymen, or doctors, anything on emergency calls. Everybody else had to go through the custom post. Not only that, but you had a wee book, and when you went through the Republic customs, you got it stamped in and . . . stamped out.

Now, you could not go in before eight o’clock in the morning, or you could not come out after eight o’clock at night, unless you had a request. If you were coming out, say maybe you were courting or something and it was maybe about ten or eleven o’clock at night, when you were going to come out, you had to, when you were crossing the border, you had to say to the custom official, I’ll be coming back at ten or half ten the night, and I need a request, which was two shillings . . . and he would have been there to stamp you out." Frank Eliott, Strabane, Co, Tyrone Though the political partition of Ireland occurred in 1920-1 the border became more significant both as a symbol of separation and as practical reality following the creation of the customs barrier in 1923 which financially separated the Irish Free State from Northern Ireland and the British State. A system of duties payable on the movement of goods between the two jurisdictions was put in place and with it a whole new set of arrangements for the regulation of the movement of people and goods across the border, that involved paperwork, permits, custom points, practices of inspection and officially approved routes for travel.

In order to make a system of checking effective, people moving goods for personal use or sale were required to cross the border at a series of official designated crossing place where their goods could be checked. These 'Approved Frontier Crossing Points' and approved routes on the existing road network were agreed between the British and Irish custom authorities. Those bringing goods across the border were required to use these routes at the approved daytime hours. Some roads near approved crossing points were also blocked at this stage but most other roads remained open for people travelling on foot.

However, car travel was prohibited on them and people using these routes could be subject to checks and penalties from patrolling customs officers. These fifteen routes and crossing points remained in place for over six decades. With their associated custom stations, known was 'frontier posts', 'frontier stations' or locally as 'custom huts', on either side, they became an established and significant aspect of the border Customs officers on both sides were responsible for checking what people were bringing with them as they crossed the border and imposing duties when appropriate. People were required to keep up with changes in the lists of what goods were subject to duties and the nature of any allowances or exclusions.

In addition the routes of the railway network at the time of partition frequently crossed the border and a new system for interrupting cross border train journeys for the examination of the goods being transported by individuals or in bulk to supply retailers was established. The difficulties of running railways services under these conditions contributed to the closure of the railway lines that crossed the border. Only the cross-border railway service between Dublin and Belfast survived the closures of the 1950s. These closures had serious consequences for the patterns of work, trade and travel that had developed round the railway network and increased the isolation of the borderlands. 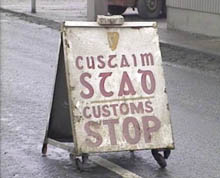 Therefore, until the early 1990s every journey across the border on foot, bicycle, cart, car or train could be subject to some form of inspection either at customs points or by custom patrols. As travelling with some form of shopping is such a routine part of everyday life, the requirement to use approved routes or be subject to penalties meant that most travel in the borderlands had to be planned around using the approved crossing points. This system resulted in three of the key features of borderland life – firstly the experience of being checked by customs officers either side of the border; secondly, people’s efforts to avoid restrictions on or duties payable on the goods they brought with them across the border by smuggling goods across; and thirdly the much longer journeys many people faced in order to cross at an approved route much further away rather than the unapproved routes near by.

The movement of motor vehicles was also regulated after April 1925. Those travelling across the border by car or van were required to obtain authorised pass for travel known as a 'triptyque' or bond in the form of an annual deposit. Acquiring one could be time consuming, difficult and expensive especially for those who lived in the Free State (and later Republic) and needed to have their bond guaranteed by a ratepaying resident in Northern Ireland.

Drivers were required to have a pass book stamped on crossing the border either way and to either do so during daytime hours or pay to cross and be officially stamped back across the border at a specified requested time. Those who failed to have their car pass stamped on the way back across the border could have their vehicle confiscated. This system of regulating car travel also became an established feature of borderland life. Vehicles owners were also required to make sure their vehicles were taxed and insured for travel on both sides of the border.