Though the creation of the customs system has significant effects of local and regional networks of social life, commerce and business and people’s travel for shopping, work and leisure, the nature of the border and its effects changed in the early 1970s when much greater restrictions on movement across it were put in place. Before the early 1970s most border roads remained passable even if they were not ‘approved’ for the transport of cars or goods. Some roads had been ‘spiked’ by the RUC to prevent their use by car during the IRA border campaign of the mid 1950s to early 1960s but most remained unaltered.

As the Troubles escalated in the early 1970s the border became subject to a systematic attempt to make it impossible to cross it by road except at approved routes where army and police checkpoints were installed near the border in Northern Ireland. All roads, including remote country lanes, other than the approved routes were made impassable by the British army and security forces. Craters were dug in the roads. Large concrete blocks were put in place. Bridges were blown up where they crossed over a stream or river that marked the border. This was an effort to restrict the movement of paramilitaries into Northern Ireland from the border counties of the south and to prevent the easy escape of paramilitaries across the border into Ireland.

For many local people who were aware of the many ways in which the border could be crossed on foot across fields or open country, this attempt to seal the border was a pointless strategy whose main effect was to dramatically restrict the movement of ordinary people. For others, both in Ireland and Northern Ireland, this militarization was a reassuring response to republican violence. Some of those feeling most vulnerable to attack by republican paramilitaries – Protestants living in predominately Catholic areas of the borderlands in Northern Ireland – knew that the road closures could not prevent movement across the border, but felt that road closures did afford a degree of security and reassurance from attacks and the easy escape of their perpetrators across the border into Ireland. 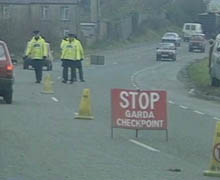 Others felt as frustrated by the road closures as their Catholic neighbours but unable to express this frustration since it would been seen as disloyal to the wider Unionist population of Northern Ireland for whom the border was seen as vital to the existence and security of Northern Ireland.

Travel across the border during the Troubles was profoundly affected by road closures and British army check points at which people were stopped, questioned about their journey and had their vehicles searched. Road closures meant much longer journeys for many people and army checkpoints led to often long and unpredictable delays. The anxiety, frustration and sometimes anger experienced in encountering heavily armed soldiers at checkpoints, and fear of being caught up in an attack on an army checkpoint or patrols or of being ambushed by an IRA unit were for many people part of the experience of crossing the border during the Troubles.